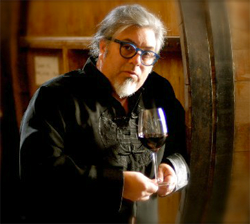 Sommelier Charlie Arturaola is legendary in culinary and oenological circles. A charismatic wine expert, Charlie approaches his life’s passion with expert knowledge and contagious enthusiasm. His unique presentations are enjoyed around the world.

Arturaola is the president of the Miami based Grappolo Blu Inc. where he lectures, conducts educational tastings, acts as an expert appraiser for insurance companies, consults with foreign importers, and mentors new members of the wine community. His fluency in five languages has taken him from Brazil to Bordeaux and from Montefalco to Patagonia, allowing him to deliver his passion for wine in Italian, French, Spanish, Portuguese and English.

In 2010, Arturaola starred in “El Camino del Vino,” a fictionalized documentary. In the film, he is at the Masters of Food and Wine in Mendoza, an event he originated and of which he is the founding sommelier. The fiction is that he loses his palate and seeks counsel from various people in the Mendoza wine business to get it back. He begins with Michel Rolland and proceeds on a funny and touching journey to six wineries in Mendoza, eventually returning to his birthplace, Montevideo, Uruguay. “El Camino del Vino” won the FIPRESCI award at the Mar del Plata Film Festival in 2010. In 2011, the film screened in the prestigious Kino Kulinarsche program at Berlinale, at the newly established Transatlanyk Film Fest, as well as at Enolgica 32 in Montefalco. Plus film festivals in Copenhagen, Moscow, and San Sebastian. The US premiere was at the Napa Valley Film Festival. “El Camino del Vino” is scheduled to screen in London in April and the Melbourne Film Festival in August.

Charlie has been honored with the 2012 International Wine and Spirits Competition Communicator of the Year Award, Sponsored by Vinitaly. The award recognizes an individual whose communication skills in the last 12 months have made an exceptional contribution towards promoting and increasing public awareness and interest in wines and spirits.

He is currently working on a television pilot with the director of the film, Nicolas Carreras. A second movie is also being discussed.

Internationally, Charlie has been named Chevalier by the Ordre des Coteaux des Champagnes, in Palm Beach, and has represented L’Ecole du Vin de Bordeaux as a Formateur in Brazil’s tour. He has conducted seminars on behalf of the Consorzio del Brunello di Montalcino, the Tutela del Morellino di Scansano, the Consorzio del Chianti Classico, the Vino Italia Tour, The Denominacao de Origen do Vinho Verde and ” Wine Origins.”

Influencing young oenophiles is an important part of Charlie’s life and he has been teaching and mentoring young people since 1998. As an educator, Arturaola has been honored as a “Distinguished Visiting Sommelier” at Johnson &amp; Wales University in Miami where he taught at “The Wine School” from 1998-2004. From 2007-2010, Charlie taught at Lynn University as an adjunct professor at the College of Hospitality. Currently he is working on a wine and food series, Palate Play, at the new Culinary Center at Miami Dade College.

Charlie serves as a judge for the American Fine Wine Competition, the Golden Glass Awards and the International Wine and Spirit Challenge.

Consulting has taken Charlie to Spain France, Portugal, Argentina and Spain in search of great values for the British Columbia and Alberta markets. In addition to selecting all of the wines for their portfolio, Charlie writes all the tasting notes, presents the wines to the buyers and does short educational videos to support the brands.

A member of the American, the Worldwide, and the Italian Sommelier Associations, Arturaola is a certified sommelier with an advanced degree from the L’Ecole du Vin a Bordeaux.